Welcome, lets build fast web app. There is so much content and competition on the internet, this gives endusers many options to select from. How you make sure that the user decides to use your app, are your services good enough for users to make that decision? No matter how good your services are when a user visit your websites they have certain expectations, the one feature, today every user looks out for is an immediate response, fast feedback, on an average a user only tends to wait for 2-3 sec for a page to load before moving on. I know right, thats so impatience. But we got to work on it nevertheless. So, why the page load time is high? The time taken for a page to load is result of so many factors like parsing and execution of JS scripts, loading of assets like(images, fonts, css), data fetching etc. By reducing page load time we have a way to improve the user experience and meet their expectations. One of the solutions to this is by using caching, caching can help us solve the slow response problem to an reasonable aspect.

When it comes to web performance and app optimization, caching is one of the common solutions you cannot overlook, caching is something which is built into Browsers and HTTP requests and is natively available to us the developers to integrate into our app without much configuration overhead, lets learn when & how to use it.

Take a look at your desk and you will find some commonly used items there, like pens, notepad, snack bars, water bottle, mobile charger etc. Since your desk has a limited space you only keep stuff which you find important and frequently used on it, while the other stuff you keep in cupboard or somewhere nearby, your fridge 😉.

So in above setup when you feel thirsty you don't always have to getup and walk to kitchen to drink water, you can simply grab the bottle on your desk. This definitely saves us time and effort.

Caching is also something similar, its concept when you store a copy of the frequently used data closest to your user to avoid the re-fetching. In caching we tend to identify data which we know won't change that often or data that is repeatedly accessed by user to near proximity of the access point that is our application. The data i.e. stored or copied during caching is know as cache.

A desk setup as a cache store is very contrived example but it helps with mental model. 🤷‍♂️

Its not only about response time, caching also help us with
Note ✍🏽When implementing caching its should be known not all request happening from client will be captured at server thus server metric will not give true picture of client behavior.

Before moving on with the implementing caching lets understand where in our architecture we can have a cache store. Caching can be introduced at multiple levels of an app ecosystem,

Working with the Caching

The browser inspects the headers of the HTTP response generated by the web server, to decide which request response it should cache in the system.

Expire header can be seen in many sites, it was introduced in HTTP 1.0 but it's not very common today,

Introduced in HTTP 1.1 which accepts comma-delimited string that outlines the specific rules, called directives. The Cache-control header allows you to set whether to cache or not and the duration of the cache.

Before HTML5, meta tags were used inside HTML to specify cache-control. This is not encouraged now as only browsers will be able to parse the meta tag and understand it. Intermediate caches(proxy servers, cdns) won’t.

Note ✍🏽Browser won’t make a call to the origin regardless of whether the content has changed or not till the cache is not expired or invalidated.

Note ✍🏽Sometimes, when using caching we had to serve user with stale content.

Out of the box solution to scale

Since caching is such a powerful optimizations technique, web/app architecture have a layer for caching and this layer is occupied by Content Delivery Networks(CDN).

A content delivery network (CDN) is a group of geographically distributed servers, also known as points of presence (POP). CDNs are used to cache static content closer to consumers. This reduces the latency between the consumer and the content or data needed 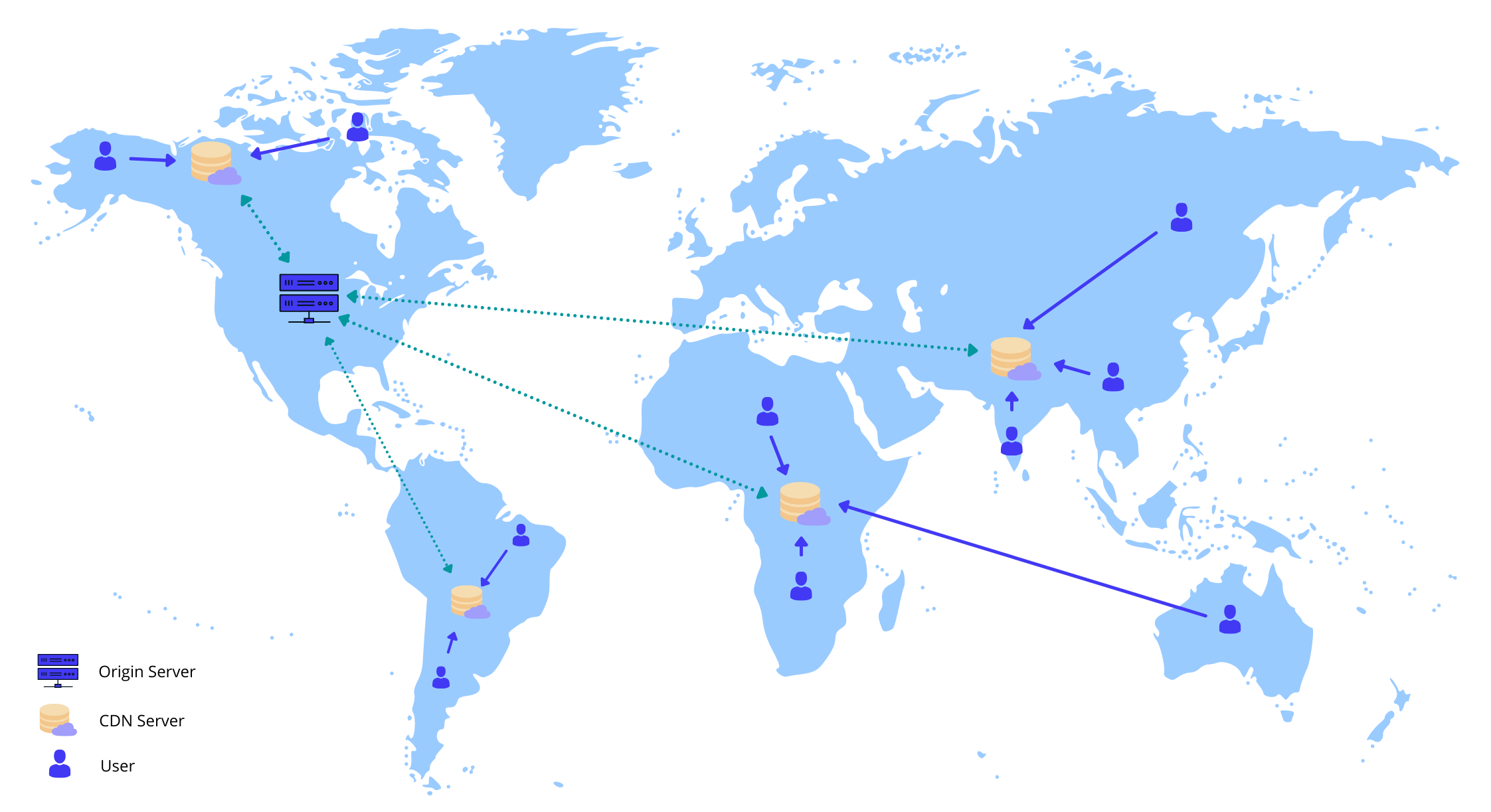 A CDN can achieve scalable content delivery by distributing load among its servers, by serving client requests from servers that are close to requesters, and by bypassing congested network paths.

CDN Cache Hit Ratio, this is the amount of traffic, both total bandwidth and sheer number of transactions, that can be handled by the cache nodes versus the number that gets passed back to your origin servers.

Origin servers still have an important function to play when using a CDN, as important server-side code such as a database of hashed client credentials used for authentication, typically is maintained at the origin.

So know we know web caching comes at multiple layers and it help us improve our app performance and reduce operation cost. If your site uses static content then its a must to have solution for your web app. See how frequent and redundant those https calls are and accordingly add caching into your application arch. Lets give the user a better experience, Adios 👋

Designed and developed by Pushpendra Singh.